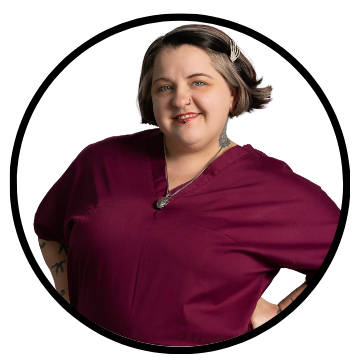 Janelle has been working at PASE on the overnight team since October 2021 and is delighted with all the exciting growth happening. In February, she became RECOVER BLS certified. With 20 years of handling and restraint with various studies in behavior, she is an experienced team members who will step up to care for a scared or reactive pet. She is also passionate about end-of-life care and making sure that final goodbyes are as beautiful and gentle as the families and pet deserve.

​​​​​​​Janelle’s pets, all adopted, include a cat named Cricket, 2 dwarf hamsters, several fish, and a lazy but gentlemanly elkhound-mix named Chewyand a ‘border chow’ named Ziggy who was found near the hospital! Aside from her love of animals, Janelle is an artist of many mediums and has plans to open a small non-denominational chapel & non-profit cafe in the city next year.